After years of negotiations and patient waiting, a date was finally announced. May 2, 2015 was marked as the day when the so-called “Fight of the Century” would take place. Insults were hurled, bets were made, and about 95% of all vehicles in Metro Manila mysteriously vanished from the roads, leaving only a gigantic dust cloud of unshakable faith, indomitable will, and somewhat misplaced Pinoy pride in their wake.

And maybe a bit of chaos magic thrown in as well, for good measure.

I was fortunate enough to receive an invitation to SPARKS Guilly’s in Quezon City to watch the historic first (and possibly last… nah, not really) fight between world-renowned boxers Manny Pacquiao and Floyd Mayweather, Jr. on live TV. Now, I admit that I’m not exactly the biggest boxing fan in the world. As a matter of fact, the last boxing match I saw (read: really paid attention to) was Tyson vs. Holyfield, and that fight took place almost two decades ago.

“What, you thought that was my ear? That was just the cork stopper for all of my AWESOME JUICE, brother!“

However, I couldn’t bear to pass up on the chance to try two new things: 1) sampling the delicious offerings of a soon-to-open sports bar and 2) being surrounded by screaming boxing fans who could probably generate enough energy to simulate a small nuclear explosion, while desperately trying to understand why these two half-naked men couldn’t just sit down and settle their differences over, I don’t know, biscuits and tea or something equally harmless, instead of trying to punch each other’s teeth out while wearing shorts seemingly made out of car logos and soap brand patches. 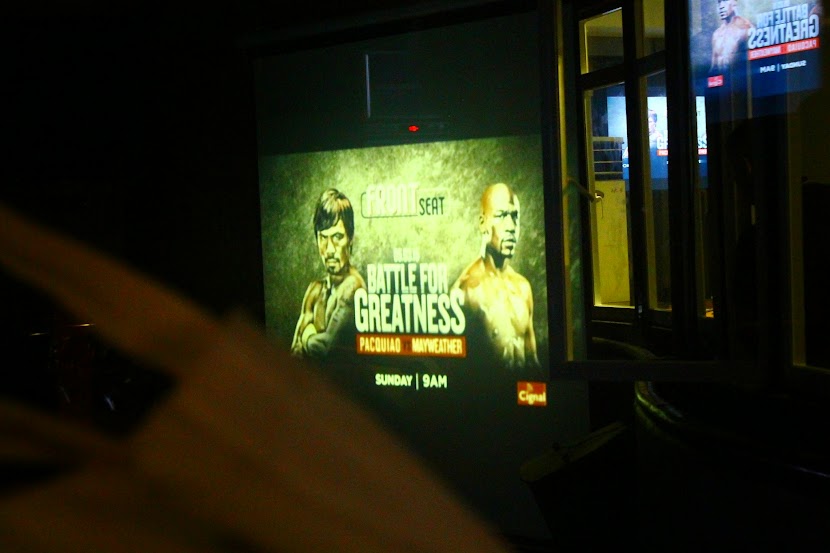 Of course, given that both of them could easily punch my face hard enough to make it look like a throbbing fruitcake, I guess I’m better off not asking.

My girlfriend and I arrived at SPARKS Guilly’s a bit early. We took the opportunity to look around and snap some photos of the place. 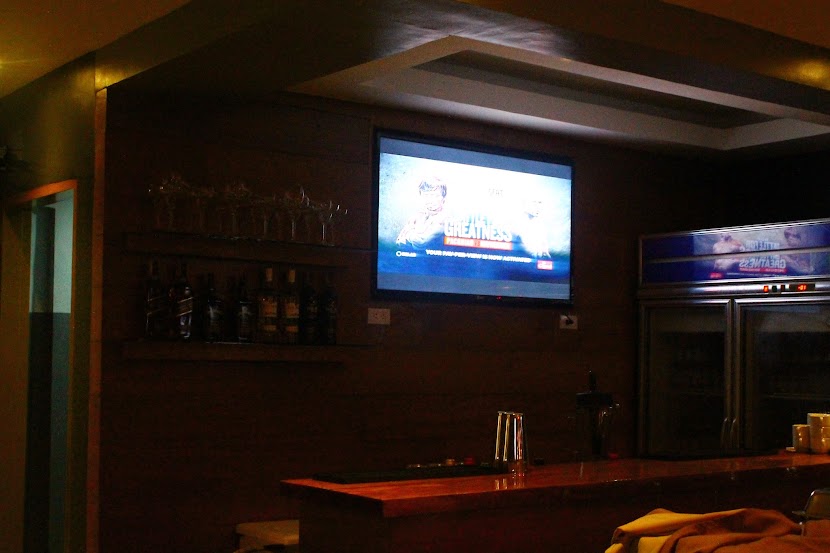 The place is clean and roomy. Here’s a shot of the counter, because seriously, what kind of bar doesn’t have a counter? And no, I don’t know the answer to my own question. I don’t go to a lot of bars. Bite me. 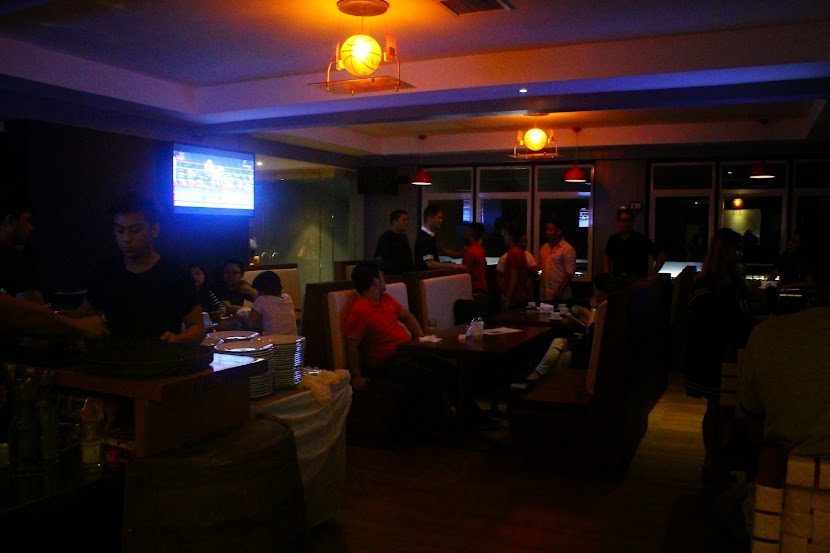 It’s got a lot of seats, too. It’s a great place to watch sports, enjoy the company of your friends, or sob quietly as the athlete you were rooting for loses spectacularly, on live television, right before your eyes. 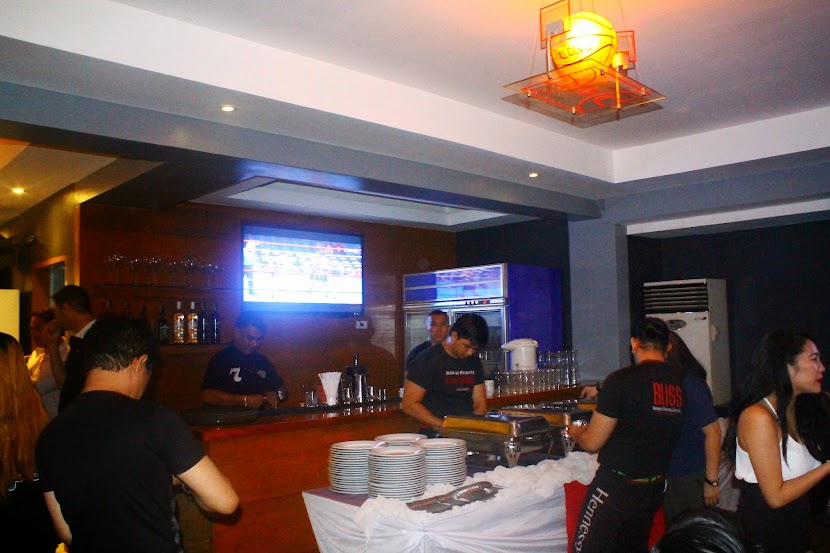 Food, at last! Because we were early, we had to wait for about an hour and a half… 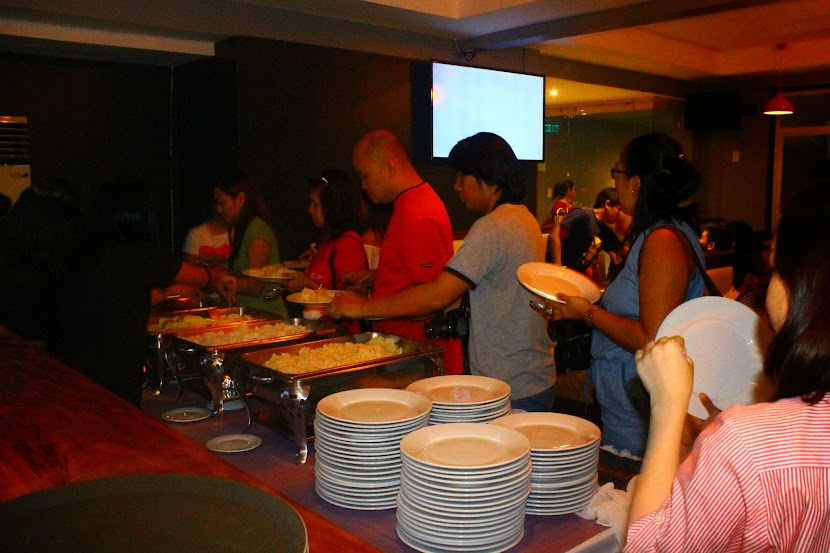 …and give way to *other* hungry guests, as we continued to take more pictures and envy the people who were already getting the chance to sample the awesome breakfast served to us on that day. 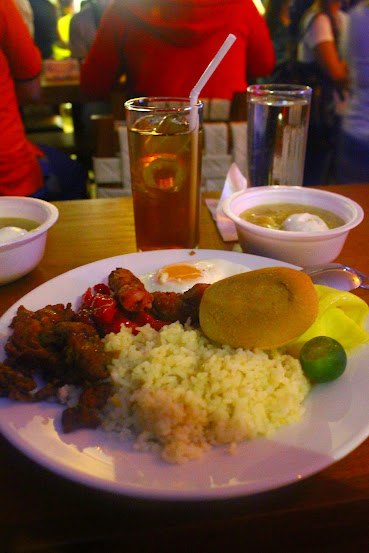 The wait was definitely worth it, though! The eggs, beef tapa, and tocino were particularly excellent.

Pretty soon, it was on. 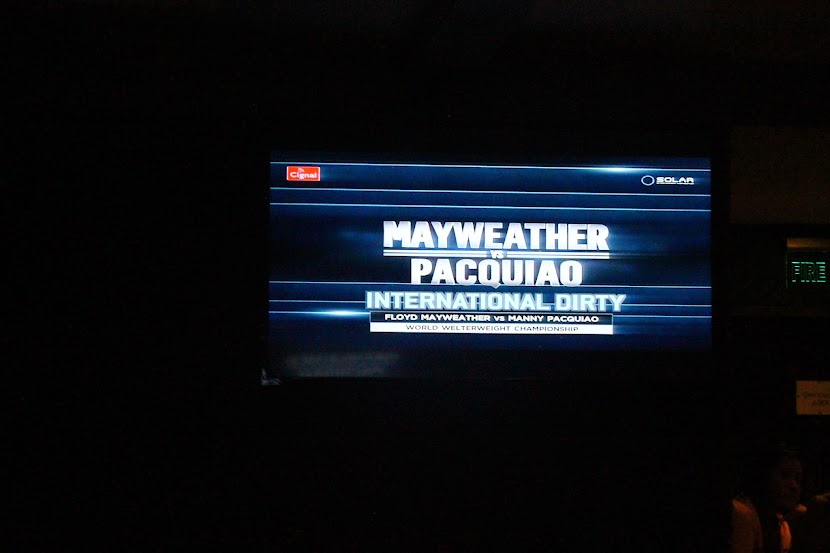 Fun fact: “Dirty boxing” may have actually been adapted from the Filipino concept of “suntukan.” Education’s fun, kids! 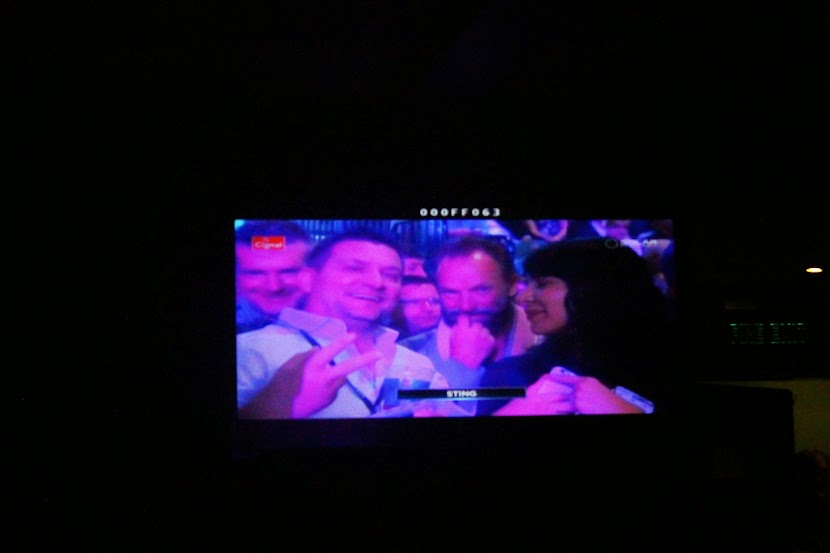 And yes, he was watching you. Er, them. All of us. Maybe. 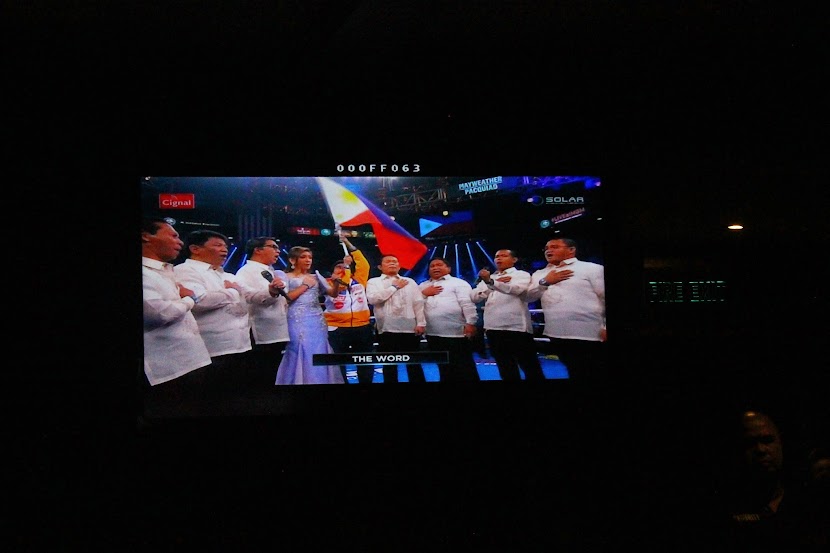 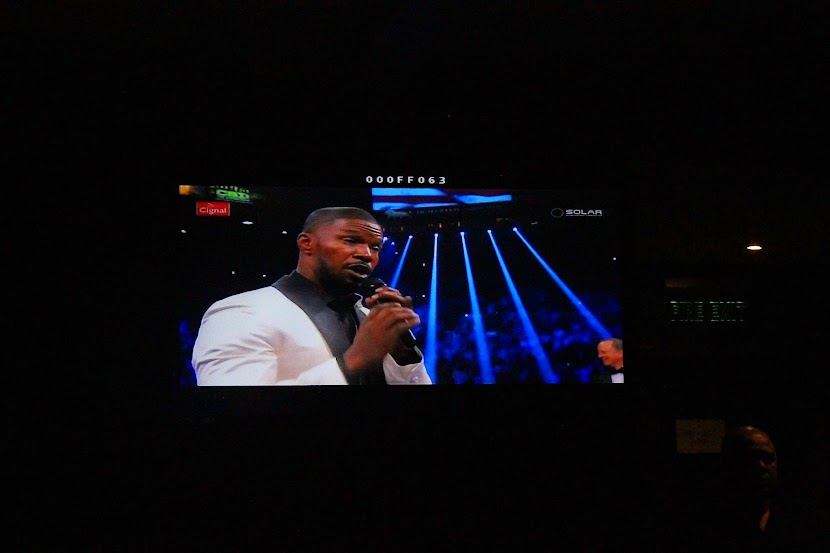 Really? Jamie Foxx? I was shocked, to say the least. 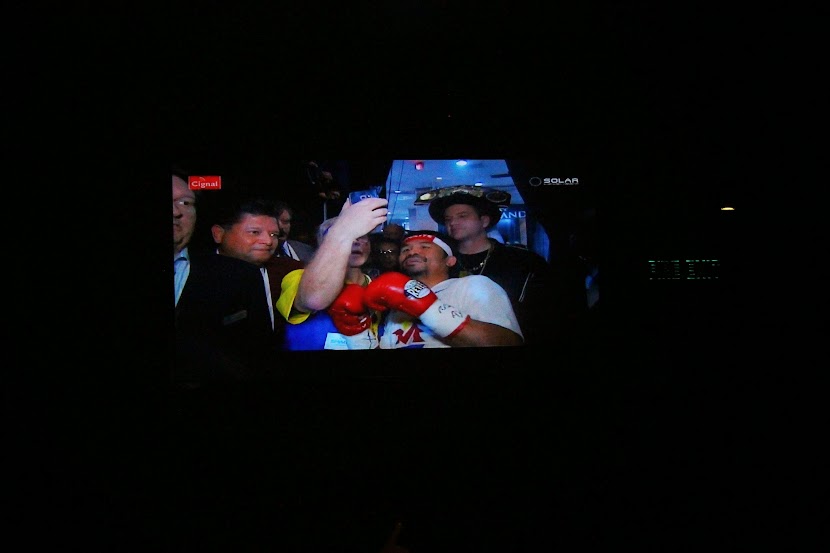 The “Pambansang Kamao” engages in what appears to be the national pastime: taking selfies, groupfies, and whatever-else-fies. 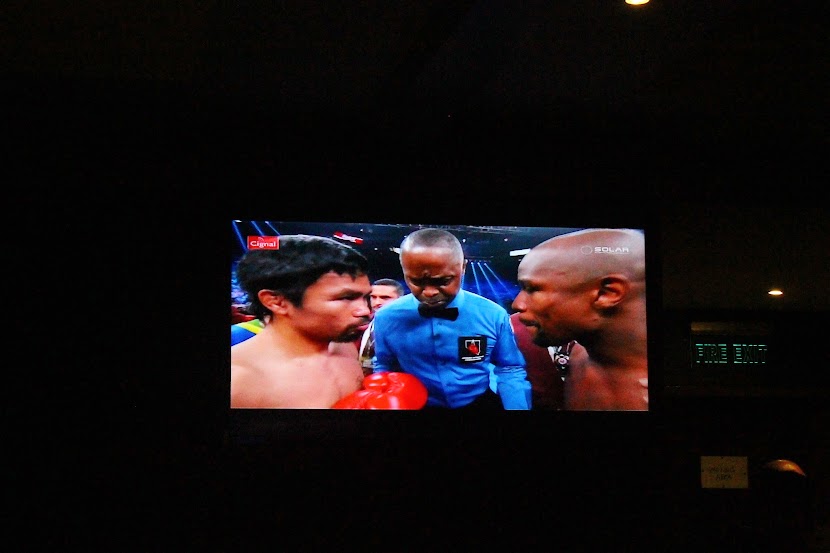 We all know what happened next, though. Nevertheless, I still enjoyed the experience. I’m happy I got the chance to watch the fight with enthusiastic fans while enjoying a fantastic breakfast.

With a passionate team possessing over 90 years of cumulative experience across multiple fields, SPARKS has established itself as a pioneer in the 24-hour local entertainment industry. Combining the ambiance of a bar with facilities that any sports fan would love, SPARKS is all about enhancing the customer experience – creating the best venue for sports fans to sit back, relax, and enjoy watching their favorite teams go for gold. 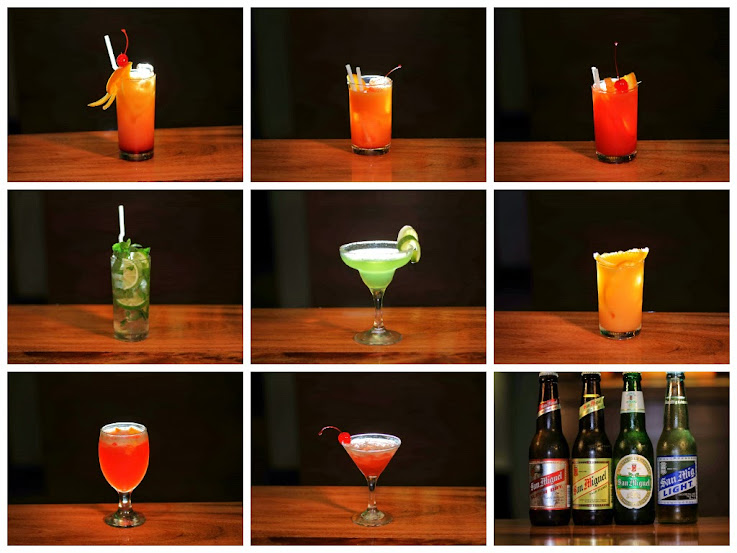 SPARKS‘ offerings include dance clubs, sports bars, spa rooms, VIP rooms, and venues for recreational sports. Boasting a world-class food and beverage menu, top-notch customer service, and access to international sports events, SPARKS is set to revolutionize the way fans experience the natural high that comes with watching sports, with a three-year plan for aggressive growth across the country – and even the world – set in place. 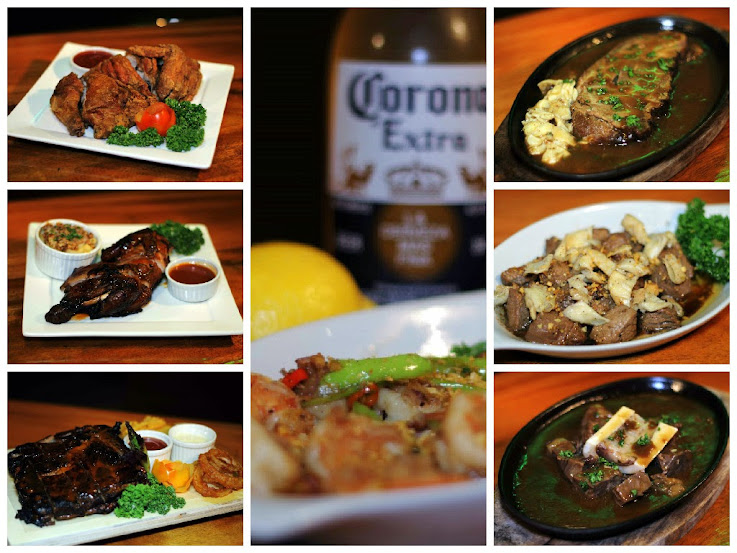 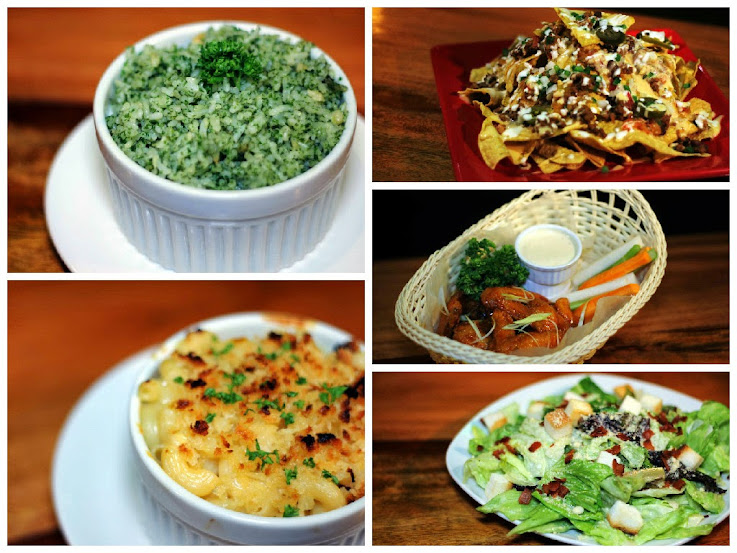 Sides and salads to go with SPARKS’ yummy food options

SPARKS Club and Bar is located on the second floor of Guilly’s Island Bar and Grill, along Tomas Morato in Quezon City.

Visit the official website of SPARKS Club and Bar (click here) and watch out for their updates and announcements on Facebook (facebook.com/SparksClubandBar), Twitter (@SparksClubBar) and Instagram (@sparksclubandbar). For inquiries, you may call or text them at 0942 822 5775, or send them an email at info@sparksclubandbar.com. 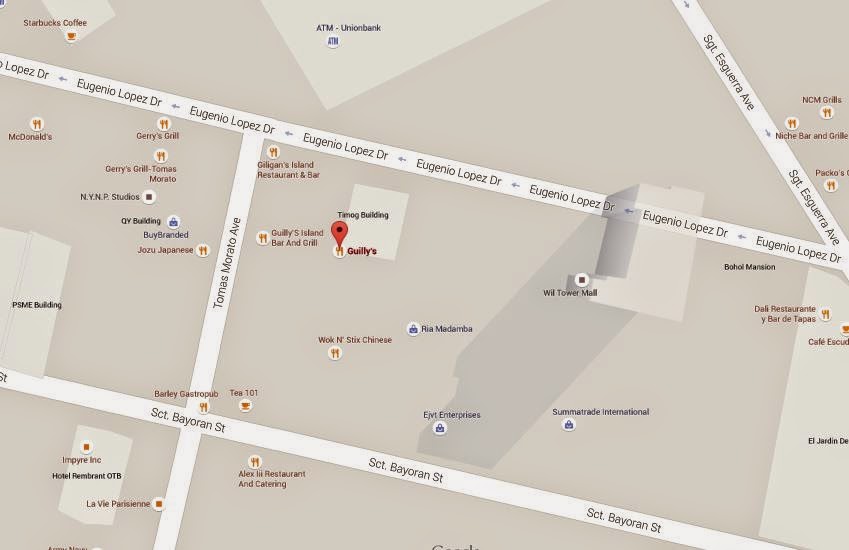