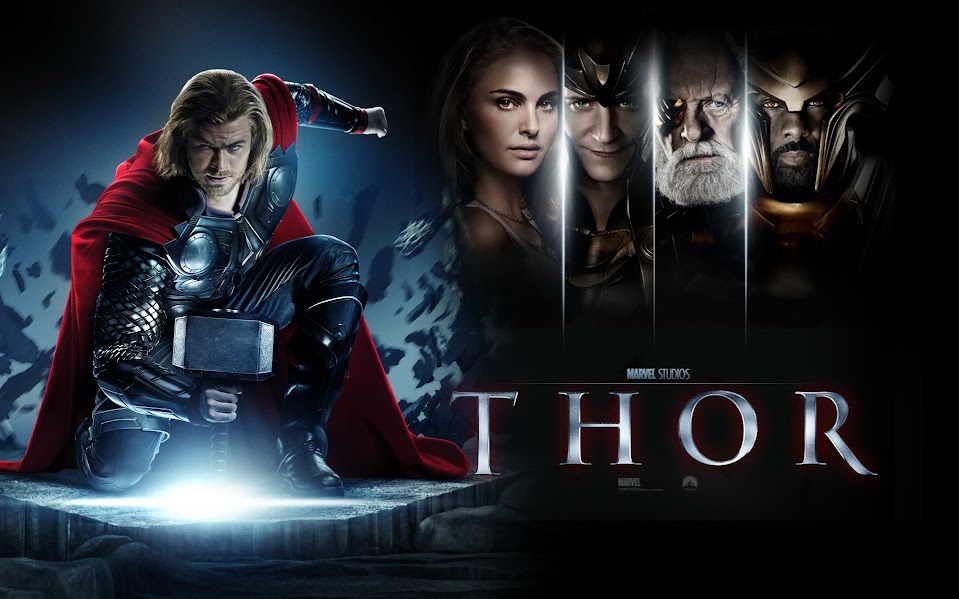 “Whosoever holds this hammer, if he be worthy, shall possess the power of Thor.”

Out of all the big names in the Marvel Universe, Thor Odinson was always the one character I never really warmed up to. Being an Avengers nut, I always saw Thor as an essential character in every roster, but only to complete the in-universe Big Three with Captain America (my favorite core Avenger) and Iron Man. [I say “in-universe” because we all know that in the real world, Marvel’s Big Three are Spidey, Wolvie and, up until the recent Iron Man movies, the Hulk.] I don’t know; for some reason, I always saw his “universe” as bland and boring, and most of his story arcs just aren’t my cup of tea. That’s why I was initially lukewarm to the announcement that they were making a Thor movie. It started out as a rumored Iron Man 2 storyline before it grew into its own film, initially billed as having a Lord of the Rings feel to it.

Thor stars Chris Hemsworth as the God of Thunder. Joining him are Natalie Portman as Jane Foster (Thor’s human love interest), Tom Hiddleston as Loki, the God of Mischief and Thor’s brother, and Anthony Hopkins as one-eyed Odin, the Allfather. Other noteworthy and fan-favorite characters are the Warriors Three (Ray Stevenson as Volstagg, Tadanobu Asano as Hogun and Josh Dallas as Fandrall) and Lady Sif (Jaimie Alexander). Of course, what Avengers tie-in movie would be complete without the presence of S.H.I.E.L.D.? Clark Gregg returns as everyone’s favorite S.H.I.E.L.D.-suit-who-isn’t-one-eyed, Agent Coulson. Clint Barton a.k.a. Hawkeye (Jeremy Renner) is also in the film, which practically made the inner fanboy in me all giddy like a schoolgirl on a sugar high. Oh, and be on the lookout for a certain driver somewhere near the middle of the film. Excelsior. 😉

The movie follows the banishment of Thor from Asgard after his reckless actions brought them at the brink of war with their hated enemies, the Frost Giants. As the son of Odin experiences life on Earth, he learns valuable lessons about compassion, humility and love, and rises above his past mistakes and reclaims his power, as well as his rightful place in the kingdom.

Through and through, the movie is a visual treat. The realm of Asgard is appropriately majestic, crystalline and magical in appearance, and the Bifrost Bridge is a beautiful prismatic pathway that really earns itself the moniker “Rainbow Bridge”. The character designs and costumes are also impressive. Thor himself is a mix of contemporary (“classic Thor” body frame), modern (Coipel-designed “Modern Thor” costume), and Ultimate (long-haired and bearded Hippie Jesus) styles, and while I am not terribly fond of Ultimate Thor’s design, the combined elements work well.

Allfather and Loki are equally majestic – Loki’s helmet in particular was well-made – and the Asgardian warriors are convincingly battle-ready.The Destroyer armor is IMPRESSIVELY accurate to the source material, and the Frost Giants are menacing and definitely a step above those blue-skinned Avatar creatures in terms of visual impact. Additionally, it was a good decision to go with an origin story a little closer to the more realistic and believable Ultimate universe version of the story*. [See Bonus Feature below]

In as far as acting is concerned, the entire cast did a stunning job. There was initially some doubt about Chris Hemsworth’s casting as Thor, but believe me when I say that they got the right man for the job. A small detail, but worth noting – Thor’s distinctive “I say thee NAY!” speech pattern is absent from the film. It didn’t affect my perception of the film, but that would depend on moviegoer preference. As for the rest of the cast, Hopkins was perfect as Odin, Portman was endearingly fangirl-ish as Jane Foster and the Warriors Three and Sif were spot-on. The real star of the movie, however, is Hiddleston’s Loki – a convincing, manipulative, devious, sneering bastard who switches between suave and batshit crazy with such grace and effortlessness.

However, the movie’s weakest point, sadly, is the plot. It feels like, once again, they tried to cram in too many elements and gave it an inadequate length of running time. The romance between Jane Foster and Thor felt rushed, and I suspect that the writers relied a bit too heavily on moviegoers’ potential knowledge of the source material and expected them to simply accept the romance angle as something natural. The “boss fight” with the Destroyer armor started out as an epic sequence which fizzled out and ended up being anticlimactic. Even sadder is the fact that I (and perhaps other moviegoers as well) was expecting a full-blown Asgardians vs. Frost Giants sequence. Instead we got an extended fight scene between Thor and Loki, which was kind of odd to me, since Loki never really struck me as a hand-to-hand combat type. The movie, like Iron Man 2, feels a lot more like an Avengers prelude than an actual standalone film.

Still, the movie is an enjoyable experience, and perhaps one of the most entertaining superhero movies of recent times. I now have a soft spot for this film, as it made me care about and appreciate Thor as a character. A balanced faithfulness to the source material’s various continuities for the titular character, stellar acting and impressive design make this film a worthy candidate to wield the power of a thunder god.

My recommendation: Watch it, but not in 3D – it doesn’t add much to the experience. It’s a must-see for any Thor, Marvel or Avengers fan.

Oh, and stay behind for the after-credits scene, ’cause if you don’t, you’ll regret it, as Thor would say, verily.

In the main Marvel continuity (formally labeled as “Earth-616” in honor of the release date of Fantastic Four #1 in June of 1961), Thor’s hammer took the form of a stick when it first landed on Earth. This works in conjunction with 616 Thor’s alter-ego Donald Blake (whom the moviemakers cleverly sneaked into the film as one of many Easter eggs), who had the ability to change from mortal to god by tapping the stick on the ground and turning it into a hammer, and vice-versa. However, since the movie universe exists as its own separate entity, it is not bound by 616 convention, and instead chose to go with a combination of Ultimate and 616 elements. I remember how someone insisted that this was “Ultimate Thor”, and I was like, “hell no, if this was purely Ultimate Thor, then that hammer should be half-axe, half-hammer,” and that it would be more accurate to say that it’s a 616-Ultimate mix.

I think it’s good that they went with a mixed origin story, since the whole “human-alter-ego” and “Stone Men from Saturn” story would have been a bit too confusing to pull off. 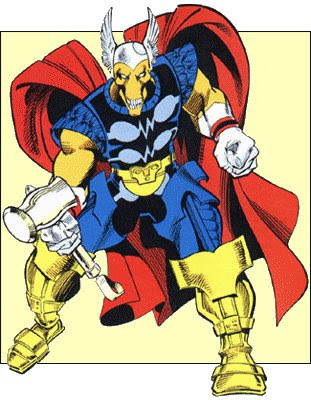