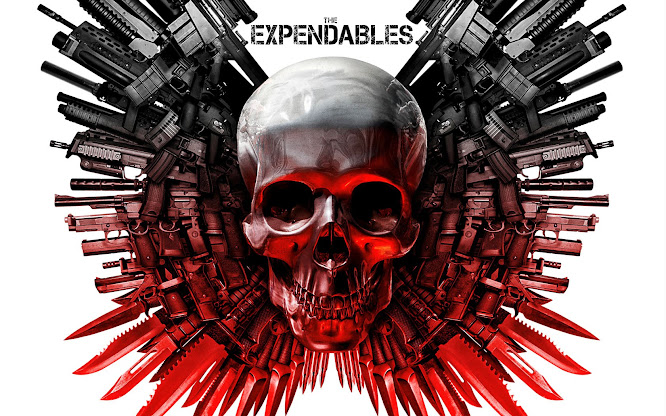 Hale Caesar: “Great, they’ve got a small army. What have we got?” (looks at Yin Yang) “Four and a half men.”

What do you get when you put together some of the biggest names in action movies, add a large number of ammunition and explosions, and mix in a couple of bro-fists? You get The Expendables, an ambitious 82 million-dollar one-and-a-half-hour extravaganza headlined and directed by Sylvester Stallone. Featuring such names as Jason Statham, Jet Li and Mickey Rourke, the film stands as a love letter of sorts to the action movies of decades past. You just KNOW you’re gonna get a few dozen blown-up vehicles and a collapsing building; it’s the kind of movie that you expect to deliver copious amounts of violence and gore. And deliver it does – from the opening sequence, it’s an action film, loud and proud.

Stallone plays the role of Ross, the fearless leader of the mercenary group the Expendables. Joining him (and complete with their own logo-adorned motorcycles) are Lee Christmas (Statham), Yin Yang (Jet Li), Hale Caesar (Terry Crews), Toll Road (Randy Couture), and Gunnar Jensen (Dolph Lundgren). The film’s plot revolves around an assassination “job” given to them by the mysterious Mr. Church (Bruce Willis), which soon turns into a high-octane adventure of betrayal, bullets and boom-booms. Stallone performs satisfyingly as Ross, a commander worthy of his crew’s respect and the admiration of the headstrong Sandra (Gisele Itie). Statham’s Christmas is the Raphael to Ross’s Leonardo, albeit a much more respectful (but still just as much of a badass) Raphael. Li as Yang perseveres through cracks about his height and his family background to deliver well-placed punches and kicks when needed, while both Crews and Couture, while not really featured as prominently as the others, have some of the coolest fight scenes and weapons in the movie. Lundgren convincingly plays the unstable Gunnar, while Mickey Rourke delivers an emotional performance as former Expendable Tool. Rounding out the cast in appropriately (and practically one-dimensional) villainous performances are David Zayas as General Garza, Eric Roberts as James Monroe and “Stone Cold” Steve Austin as Dan Paine.

The film is exactly what you’d expect an action film to be: Gratuitous gunfire, knives-through-the-lungs and people beating the living crap out of each other, with a paper-thin plot and ham-fisted lines. It’s not the kind of film that deserves a thorough analysis: Go watch an indie or art film if you’re in the mood for intellectual masturbation. This is, plain and simple, a straight-up last-one-to-kill-a-bad-guy-buys-the-beer kind of film. It’s definitely no The Dark Knight, but it sure is a hell lot of fun, especially when the Governator himself cameos near the beginning in a scene that features the most fun verbally-abusive banter I’ve heard in recent times.

That said, this is definitely not a film for younger audiences. I’d recommend it as a goodbarkada film, if your peers are into this sort of thing. Go, and don’t be afraid to ask your bros and buds out on a movie BROdate – you’ll all feel significantly manlier after the credits roll.