MOVIE REVIEW: Thumbs up for the thumb-sized “Ant-Man”

“They’ll neverrrrr see meeee comiiiiiiing. No, seriously, they won’t. Not even if they squint.”

The world of superhero comic books relies heavily on suspension of disbelief (set against a backdrop of a universe operating by perfectly logical rules and governed by the same laws of physics as the real one) in order to work. This means that, for readers to be able to enjoy the exploits of the Flash or Spider-Man, they must be willing to believe that a bolt of lightning or a massive dose of radiation would give everyday losers superpowers, not a brutal and agonizing death. Even so, there’s still a long list of ideas that even the staunchest of superhero enthusiasts would deem way too hard to swallow, much less believe.

And a couple of decades ago, a solo movie about freaking Ant-Man was probably pretty high on that list.

There have so far been three men to take up the mantle of the, er, ant. The first one, Hank Pym, was a screw-up of a scientist who kept soldiering on despite having a reputation tarnished by mental issues, domestic abuse, and the accidental creation of Ultron, a homicidal A.I. whose hatred for the human race was surpassed only by his hatred for his own “father.” The second one, Scott Lang, was a thief who never really managed to step out of the shadow of his predecessor. The last one – my least favorite one – was Eric O’Grady, an irredeemable, despicable creep who was essentially trampled to death by a few well-placed robotic boots and promptly replaced by an evil android doppelganger from an alternate reality.

So yeah, respect tends to be something that people around Ant-Man (regardless of whoever’s under the helmet) have in ridiculously short supply. Let’s face it – Ant-Man is a hero who is really easy to step on, literally and figuratively. 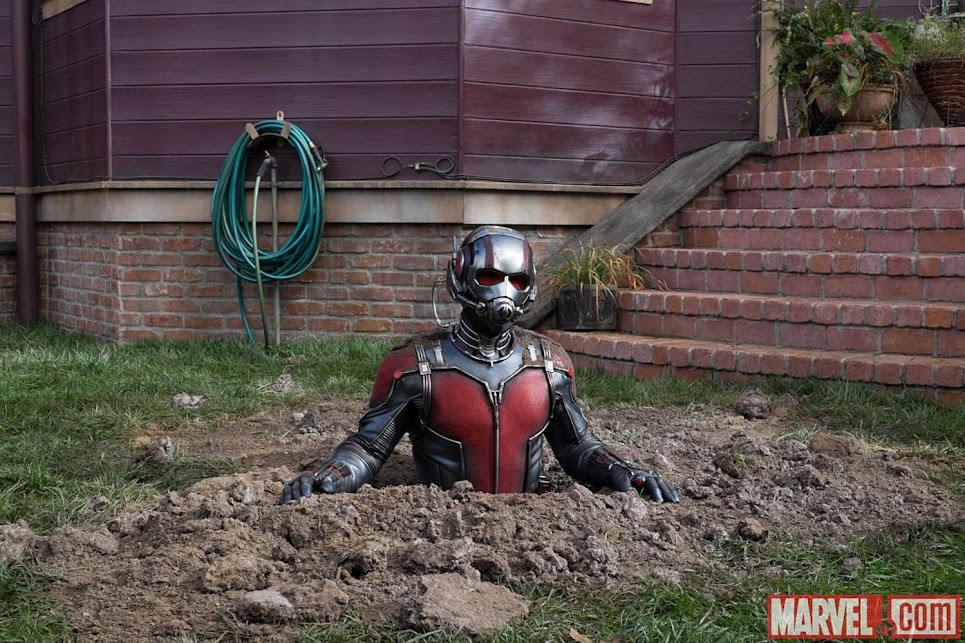 Gee, I wonder why.

However, much like the secretly awesome creatures that the size-changing superhero borrows his nom de guerre from, Ant-Man somehow manages to prove the enemies (and friends) who underestimate him wrong, again and again.

I guess we’re fortunate that Marvel Studios’ bookend to its Cinematic Universe’s Phase II, Ant-Man, has turned out to be just as unique, interesting, and pleasantly surprising as its comic book hero counterpart.

A tale to astonish

If you’re looking for something to cleanse your palate after the action-packed but mildly disappointing Avengers: Age of Ultron, you’ll find Ant-Man to be right up your alley. Ant-Man is part origin story and part torch-passing, as we see an aged Pym (played by Michael Douglas) pass the costume and technology on to Lang (played by Paul Rudd).

Fans who enjoyed Chris Pratt’s performance as Star-Lord in Guardians of the Galaxy will probably find themselves drawn to the charming rogue that is Rudd’s Lang. A man who fell from grace but is striving to be better for the sake of his daughter Cassie (Abby Ryder Fortson), Rudd is irreverent but far from irredeemable; a small-time hooligan with a heart of gold who has a knack for getting in and out of locked doors, heavily guarded buildings, and trouble in general. Douglas delivers an equally noteworthy performance as the Ant-Man of days long gone – a Pym who is formidable even in his old age, yet still has a soft spot for his own daughter, Hope (Evangeline Lilly).

The movie has a fairly simple and straightforward story, with a couple of running subplots to further flesh out the characters in Lang’s world. Ant-Man is a marriage between a superhero film and a heist movie, and while the mixture isn’t exactly even (there’s a lot more punching and shooting – this is a Marvel movie, after all), it still feels different enough from the other films in Phase II to be refreshing.

In as far as the villain is concerned, though, Darren Cross (played by Corey Stoll) sadly continues the long tradition of one-dimensional Marvel movie villains (with the exception of Loki and Wilson Fisk from the excellent Netflix Daredevil series, of course). He only really shines as a villain when he puts on his other suit and becomes the visually striking Yellowjacket, but only by a tiny margin. Anyway, he serves his purpose well in this film, as Lang needs someone else to keep him busy when he’s not surprise-sucker-punching hapless bodyguards.

Still, I did enjoy seeing Ant-Man and Yellowjacket fight, though perhaps not for the reason you’d expect. When Ant-Man was first confirmed to have Lang in the costume, I was disappointed; I’m a fan of Pym, and I was hoping he’d be the star of this film. Well, in the comic books, Yellowjacket is one of the many identities Pym adopted during his long and illustrious superhero career; considering that Hank Pym’s greatest enemy in the comics has always been himself, I found it quite amusing that his two alter-egos would end up being the final showdown in his cinematic debut. 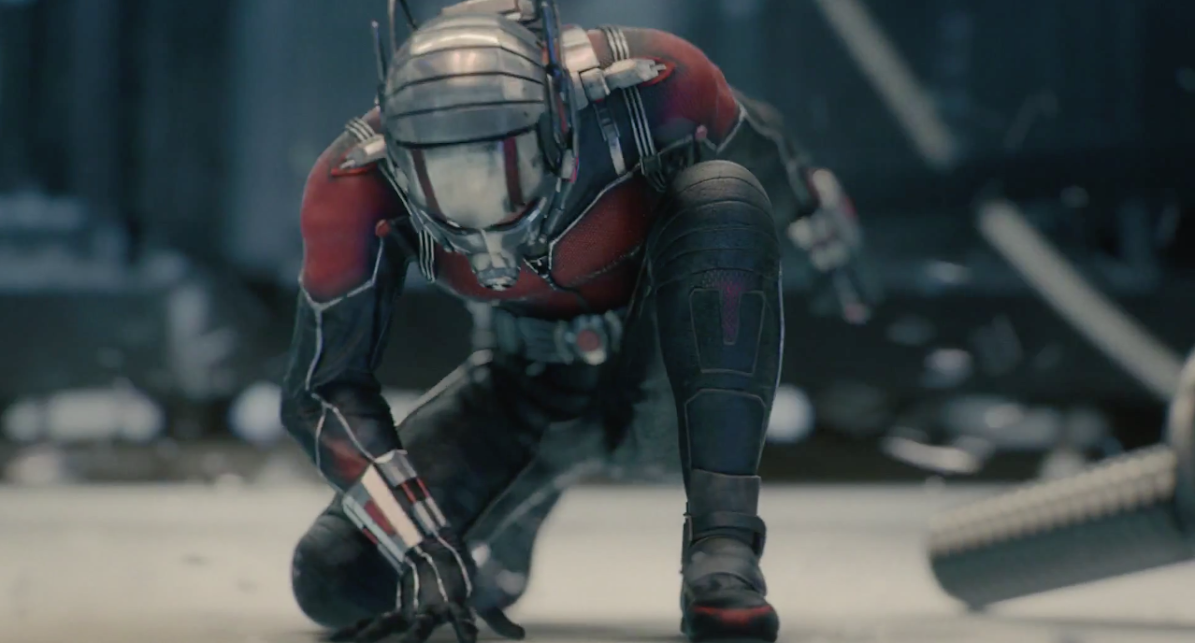 “See, I’m as cool as Spidey. I can even do the crouching thing!”

The titular character’s main power allows us to get a glimpse of some really fascinating scenery, and also serves as a gateway for us to explore an all-new realm in the Marvel Cinematic Universe. It’s amazing – and jarring, in a good way – to see the tiny hero walking around in a world full of objects thousands of times bigger than they should be. The sight of tiny everyday things becoming battlefields and even weapons is brilliant, and though some may scoff at the rather blatant (at times) product placement, that’s still not enough to detract from the overall experience of watching Ant-Man and Yellowjacket’s fun-sized fisticuffs.

It was also a treat to see Lang and Pym working with the ants to achieve their goals (though their means of controlling them, while explained in the film, still raises a number of questions). There’s a certain level of strange coolness that comes with the sight of a tiny human being taking control of a winged ant and leading an entire swarm to deliver some serious pincer-induced punishment.

Surprisingly, the film’s weak point lies in its humor. While the Scott/Hank and Scott/Hope interactions are adequately entertaining, most of the comedic acts and jokes (a significant chunk of which was delivered by auxiliary characters) either made me grin weakly or completely fell flat. I found this to be a bit unusual, given Marvel’s solid track record of humor in its films.

What it lacks in the size of its funny bone, though, it more than makes up for in its emotional backstory and touching scenes. The bonds between fathers and daughters are tested, as both Pym and Lang – two men who are more alike than they think – struggle to keep their daughters safe from harm. 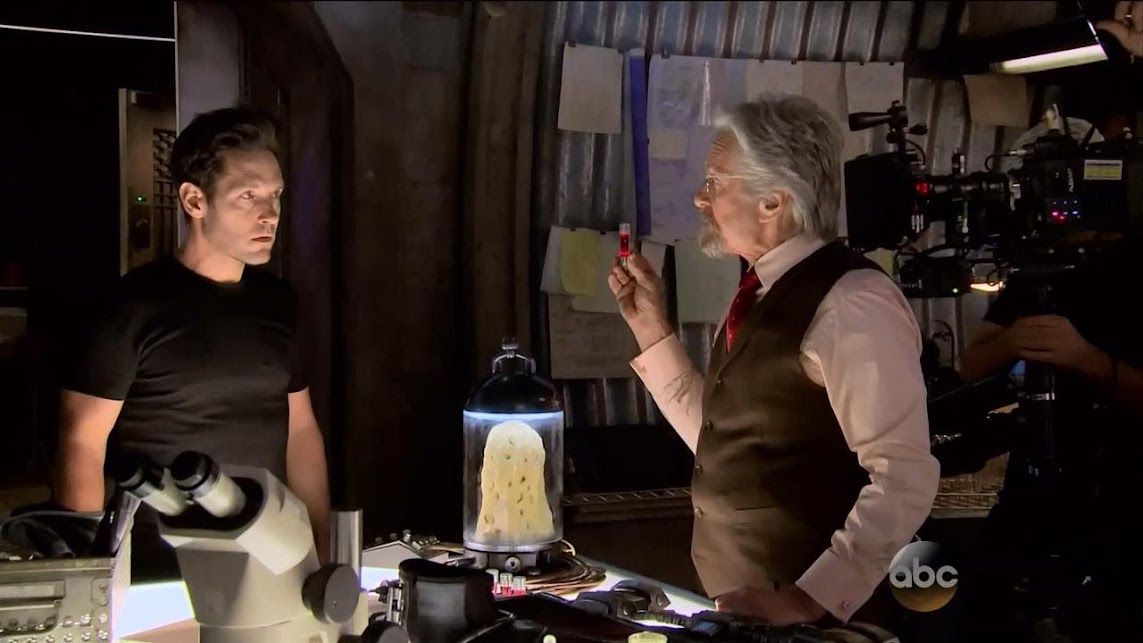 “Good job, Scott. Also, touch my daughter and I’ll shove this up your ass.”

When Edgar Wright, the original director for Ant-Man, dropped out of the project due to officially undisclosed reasons, it was Peyton Reed who was eventually selected to replace him. Fortunately, it seems like it was a good call on Marvel’s part. It makes you wonder, though: How much of Wright’s original take on the film remains in the final product?

Overall, Ant-Man is small, but definitely not too small to matter. A self-contained adventure that still ties in with the Marvel Cinematic Universe in a big way, you won’t need a magnifying glass to see why Scott Lang and his Formicidian friends deserve your full attention.

I am glad to be alive at a time when an Ant-Man movie isn’t just an actual thing, but is also an actual entertaining thing. A movie that, despite having all the odds stacked against it even before it got out of the starting gate, still ended up being a small but worthy addition to the Marvel Cinematic Universe.

P.S. Stay after the credits!